Kit with 2 und. of VELUTINATRAP® traps and 2 bottles of ATTRACTING VELUTINATRAP® attractant for the capture of the Vespa velutina Asian wasp.

Vespa velutina nigritorax is an invasive exotic species (R. D. 630/2013) native to Southeast Asia. In Spain it was first detected in 2010 in Baztán (Navarra) and in Legazpi, Irún, Hondarribia, Oiartzun, Pasaia, Lasarte-Oria and Aduna (Guipúzcoa). Since then it has spread or been detected in the Garrotxa and L'Alt Emporda (Catalonia), Otañes and Guriezo (Cantabria), Asturias, Galicia, La Rioja and Burgos.

The Asian hornet is easy to recognize since it is the only hornet in Europe that has such a dark color. The V. velutina nigrithorax variety has an entirely velvety chestnut chest and chestnut colored abdominal segments with a thin yellow stripe. Only the 4th segment of the abdomen is almost entirely yellow-orange. The head is black, the face yellow orange and the legs brown at the end. The Asian hornet is slightly smaller than the native Vespa crabro species, whose workers measure between 18-23 mm and the queens between 25-35 mm. Vespa velutina nigrithorax measures between 17 and 32 mm in length.
They usually build their nests on treetops and occasionally in undisturbed and protected areas in buildings (stairs, abandoned barns, chicken coops or parts of buildings, etc.) or in brambles, and very rarely buried.

The paired queens the previous season emerge from their hibernation, between February-March. Each queen establishes a new colony and begins the construction of the primary nest where they lay eggs from which about twenty workers leave in the months of April-May. The colony moves to a tree creating a secondary nest from May-June. From there new workers emerge (up to 1000 or 1500), and at the end of summer the females (100-300) and the males leave. Fertilized females disperse from late August to October. At the end of October and November the colony ceases to be active and the queen dies.
The adults of Vespa velutina nigrithorax feed on nectar and ripe fruits, while the larvae preferably eat honey bees and other insects that are taken to the nest by the workers.
For a period of two or three months, workers hunt insects, among which are bees, 80% in urban areas and 50% in rural areas. This may constitute an additional stress factor for honey bees, added to the current problem of pollinator decline.

The VELUTINATRAP® trap (Code: TA258) is a trap specially designed for the capture of the Asian wasp Vespa velutina.
It is a large capacity trap, very weatherproof and long lasting in the field. It consists of a large capacity transparent base, a yellow funnel with a green lid to prevent the entry of rainwater and a yellow grid to separate the captures of the attractive VELUTINATRAP® attractant (not included)
The attractive VELUTINATRAP® ATTRACTOR (Code: VA390) is a natural liquid attractant for the attraction of the Asian wasp Vespa velutina, with a field duration of 60 days. It comes in bottles of 250 cm3. 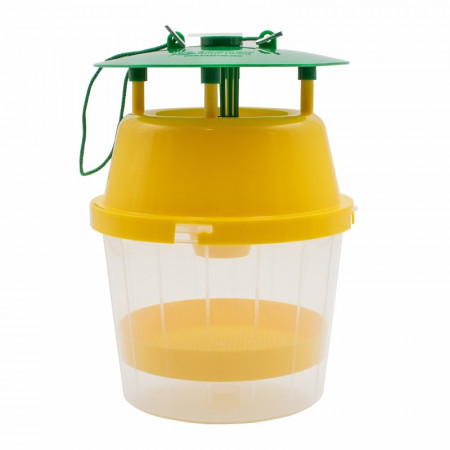 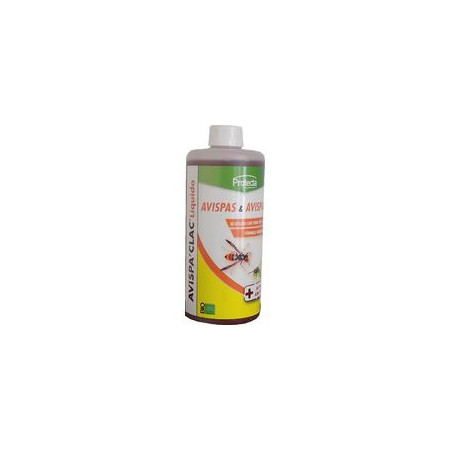 Bait for trap wasps liquid concentrated odorless and without fermentation. Its ingredients are natural: plant extracts, fruits and aromas.
Compatible with any market trap. 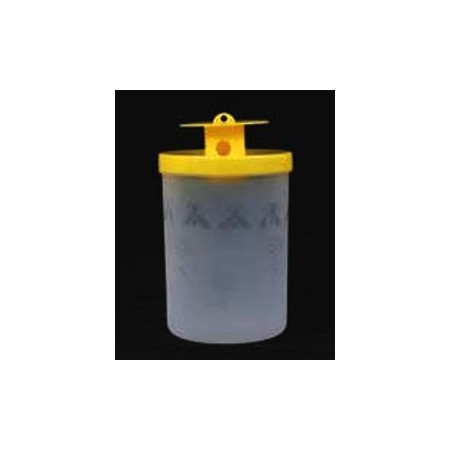 Valid for the apprehension of insects in any place, interior and exterior, in terraces, porches, gardens, swimming pools and even inside the home. There is important the control of this trap and to locate it in another place when we verify that the apprehension is not the awaited one. Though it is a trap without insecticides, we must to go away it from children and pets for the possible attacks.

Traps for control wasps and flies 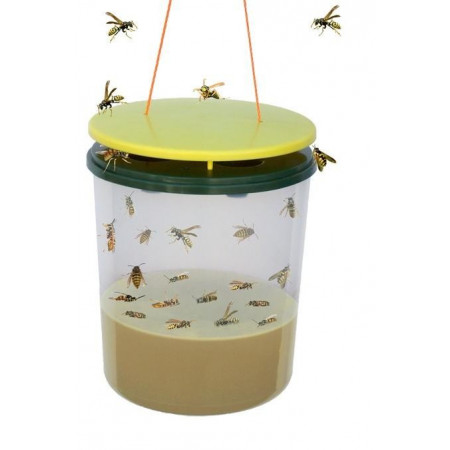 Trap serves to capture and remove wasps. This trap is very effective because it includes a very attractive bait for wasps. Ideal to place outdoors and gardens, orchards, pools, stables, farms, garages...